The two international airports  Paris-Charles de Gaulle and Paris-Orly make Paris one of the most attractive capital cities in the world. Paris Aéroport handled over 97 million passengers in 2016 – an increase of almost 2% compared with 2015.

The vitality and great facilities of Paris-Charles de Gaulle Airport and its surrounding area make it far more than just a transit area. At the heart of the airport, the spaces passengers spend time in have been completely redesigned to incorporate the latest technology. There’s a huge lounge for relaxing in, along with new places to eat that cater to all tastes and budgets. A multitude of shops sell both international and classic Parisian brands. Uniquely for an airport, there’s also an arts centre hosting major exhibitions. The surrounding area has also seen an uplift, with more than 20 hotels close to the airport, masses of meeting rooms, a high-end shopping centre with 200 retail units, and event venues providing distinctive, top quality hospitality services. This provision will soon be supplemented by a key new facility for business travellers, the International Trade Centre (ITC) – Europe's first integrated business and convention complex. Infrastructure will include a 3,000-seater international conference centre with 120 meeting rooms, three exhibition halls (38,000 m²), 1,843 hotel rooms and more than seven 3-, 4- and 5-star hotels, 130,000 m² of retail outlets serving travellers, and 3,150 underground parking spaces. And what about getting into central Paris? Nothing could be simpler, thanks to the city’s extensive modern transport network.

Paris-Charles de Gaulle, also known as Roissy Airport, is constantly reinventing itself to provide the technology, shopping, and food outlets that guarantee a unique customer experience. It was recognised in the 2015 Skytrax rankings as Most Improved Airport for service quality and customer satisfaction, in a vote by passengers worldwide. Internet terminals, free Wi-Fi, and workspaces are available to all travellers.

The restaurants at Paris-Charles de Gaulle Airport meet the varied and stringent expectations of French and international customers, with some even venturing into gourmet cuisine. New 70-seat restaurant I love Paris offers both sandwiches and a luxury menu devised by Michelin-starred chef Guy Martin. Café Eiffel, themed around the iconic Paris landmark, serves dishes that include croque-monsieurs, salads, and pasta, all expertly orchestrated by chef Michel Rostang. Household names like Marks & Spencer food store and Café Pouchkine halso have outlets here since summer 2016.

The redesigned retail areas form a little town within the airport, ranking in the top five best airport shopping centres in the world! La Galerie Parisienne by terminals 2E and 2F houses France’s largest airport retail area, with shops that showcase the unique charm of Paris. A huge luxury retail space offers prestige brands such as Cartier, Dior and Chanel.

Passengers with boarding cards for terminal 2E have a unique cultural experience in store for them at Paris-Charles de Gaulle Airport – the 250 m² Espace Musées. The National Picasso Museum is presenting its Picasso Plein Soleil exhibition here until 15 June 2017, bringing together 35 original artworks that highlight the artist's deep connection with the South of France.

Finally, L’Instant Paris is a new-generation lounge at the heart of the airport promising transit passengers a calm and comfortable stopover. You can enjoy organic world cuisine in the dining room, follow live news or major sports events on the giant screen, relax in the recreational areas, or check out the library with over 300 international publications and open-access tablets. Travellers with a long wait between flights or needing an overnight stay will get a warm welcome at the innovative YOTELAIR hotel with its 80 futuristic cabin-style rooms. Open 24 hours and bookable online and by the hour, the hotel is for the use of those travelling with SkyTeam Alliance member airlines and departing from terminal 2E halls K/L/M.

Massive choice of hotels and business venues near the airport

There’s a comprehensive selection of hotels around Paris-Charles de Gaulle Airport to suit all budgets and requirements. Many also have meeting rooms for successfully hosting seminars, team-building sessions or conferences. Convention facilities and corporate venues also abound in the wider area, within easy reach of Disneyland Paris, Aéroville shopping centre, and the exhibition centres of Paris-Nord Villepinte and Paris le Bourget. In order to best prepare your trip to Paris, see our selection of hotels and event venues.

A modern multimodal transprt network links Paris to the airport

Do you need to get to Paris from Roissy Charles de Gaulle Airport for an event or to go sightseeing? Or are you heading out of Paris to catch a flight? Nothing could be simpler! There are lots of options  available for travelling individually or by public transport, including airport shuttle buses linking the airport to the centre of Paris, taxis available 24/7, private chauffeur-driven cars, trains, coaches, and limousines. Depending on your schedule and preferences, find the transport mode best suited to your business trips or stays in Paris by clicking here for our list of transport providers. 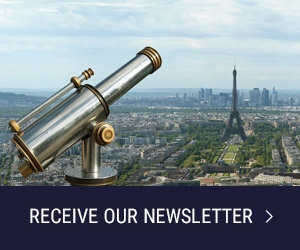 There’s a comprehensive selection of hotels around Paris-Charles de Gaulle Airport to suit all budgets and requirements. Many also have meeting rooms for successfully hosting seminars, team-building sessions or conferences. Convention facilities and corporate venues also abound in the wider area, within easy reach of Disneyland Paris, Aéroville shopping centre, and the exhibition centres of Paris-Nord Villepinte and Le Bourget. See below our selection of parisian partners!

See the list of Parisian transporters for your transport needs.

What's new in Paris on the accommodation scene: openings, closures for renovation, renovations without closure etc.

See the latest issues of buzz on meetings!